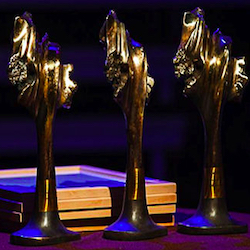 Nomination in the category of PERSONALITY OF THE YEAR.
Award of the Polish music environment.
There were a total of 150 candidates, of which five nominees were selected by the program committee in each category.

Nomination:
A well-known singer-composer, winner of about a dozen national and international competitions for both singers and composers. In 2013 her Not I, recorded with Klangforum Wien, was the selected work (won the grand prix) of the 60th International Rostrum of Composers in Prague. During the Witold Lutosławski Year she presented a special concert entitled “Lutosławski not only for children”, at which she performed that composer’s Children’s Songs and Silesian Triptych (with the Polish National Radio Symphony Orchestra). She has also frequently presented the special Lutosławski Birth Centenary programme “El-Derwid. Blots on the Sun” (a collaboration with Cezary Duchnowski and Andrzej Bauer, released under the CD Accord label in September 2013).