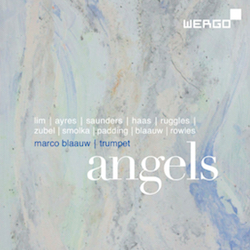 The outstanding trumpet player Marco Blaauw has made the further development of the trumpet, its technique and repertoire his aim and concern. He works closely together both with successful and younger contemporary composers. Some works were written specifically for him or suggested by him.

On the present CD, Blaauw recorded a number of extremely varied compositions for trumpet: “The repertoire of this CD comes from wonderful composers with totally different backgrounds and totally different stories to tell. Somehow I felt these pieces were related. By practising, playing, performing, and recording, each piece took on its own identity and developed a unique personality. The pieces became alive, turning into spiritual and angelic beings made of vibrating air.”